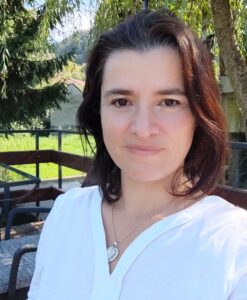 I have been a spiritual seeker since my early ages. Even as a child, I was curious about existence, God and the meaning of life and then the experience of heavy suffering (which included addiction to food) in my teenage years catapulted me into this quest for peace and the essence of who I am.

In my teens, because of nightmares, I set out to research the meaning of dreams and Jung’s psychoanalysis only to find out that all the darkness and evil in my dreams was actually my dark side, which I was rejecting and projecting onto others. After some dramatic life events that coincided with that insight, that side of me was finally accepted and so my life became a little easier as a result.

My formal education includes a BA in English language and literature and a MA in Communications. In the USA, prior to my master studies, I worked as an au pair and one day it suddenly became clear to me that I was not free. Namely, every morning the same scenario repeated with the little girl that I took care of. As much as I tried to get her ready for kindergarten in the morning, she resisted and it would all turn into yelling and screaming. I realized that I was completely emotionally trapped and that this little five-year-old girl had total power over my emotions. I decided that I would no longer respond angrily to her hysterical outbursts, and this marked the beginning of a long work on my own emotional reactions. A few years later, I started practicing presence (being here now) and at the age of 27 experienced my first awakening. While I was reading some spiritual book, I suddenly realized that there was absolutely nothing to find and that the only thing found in each moment was life as it is. I entered a blissful state that lasted for a week or so, and after that, the normal consciousness reconstituted itself but the insight that there is nothing to find stayed with me – even as the mind continued to seek spontaneously.

One day while practicing presence, I asked myself – who is the one that practices presence? Can one thought ‘I’ practice being present? I noticed that thoughts actually disappear when presence happens so if the practitioner disappears during the practice, then who is actually doing anything? In that moment I could see that life happens completely on its own, that a small thought ‘I’ is not its manager. ‘I’ was just another experience in larger awareness. Then after some years, it was further noticed that even the feeling of being present or existing is just another occurrence in formless awareness or the void that is beyond perception.

Somewhere along my journey I came across a Byron Katie video and in her I recognized the flow, presence, and absolute clarity that I was looking for. Having attended two of her Schools for the Work, I fell in love with that practice and after some time started doing it professionally, combining it with my own insights and meditative practices that I share with my clients.

Die Before You Die – Dissolution of Ego Through The Work of Byron Katie August 26, 2019